Improving the Healthcare Sector One Innovation at a Time

Inspiring the emergence of creativity and innovation within the minds of the healthcare sector marketing employees to present higher quality campaigns and solutions.
Challenge

A three-day bootcamp in collaboration with a governmental healthcare entity for its marketing and awareness employees.
Outcome

Unprecedented interactions and noticeable development in the participants’ skills, problem solving techniques, thought processes, and teamwork abilities in terms of innovative ideas and strategies. The general impact on the industry and public has yet to be seen as such effects can only be realized years into the future.
Impact

The unfortunate existence of a pandemic had the entire world reflect on its lack of attention towards the healthcare sector which was rarely made a priority beforehand. However, there have been countries working to create a healthier and more inclusive healthcare system for the public even before they were forced to.

For Saudi Arabia, that was apparent in the way it was able to quickly and effectively deal with the pandemic locally as it had been reconstructing its healthcare sector since its Vision 2030 and National Transformation Program were declared active.

It is imperative for the country to stay on its upward trajectory within the sector if it intends to reach its suggested goals. Part of the kingdom’s efforts lay in the privatization of hospitals and healthcare centers as well as the allocation of large budgets to the sector.

Another core pillar in its healthcare transformation strategy is technology, which plays a major role in providing the country’s inhabitants with higher quality healthcare and resources, offering greater access, all while lowering the total cost of getting aid. One important aspect of implementing technological solutions is the ability to innovate when doing so, whether it be part of a simple awareness campaign or a new healthcare service.

This is what the Saudi Ministry of Health has dedicated its time to doing, increasing innovation and creativity among its employees in the hopes of constantly improving the industry for the people. 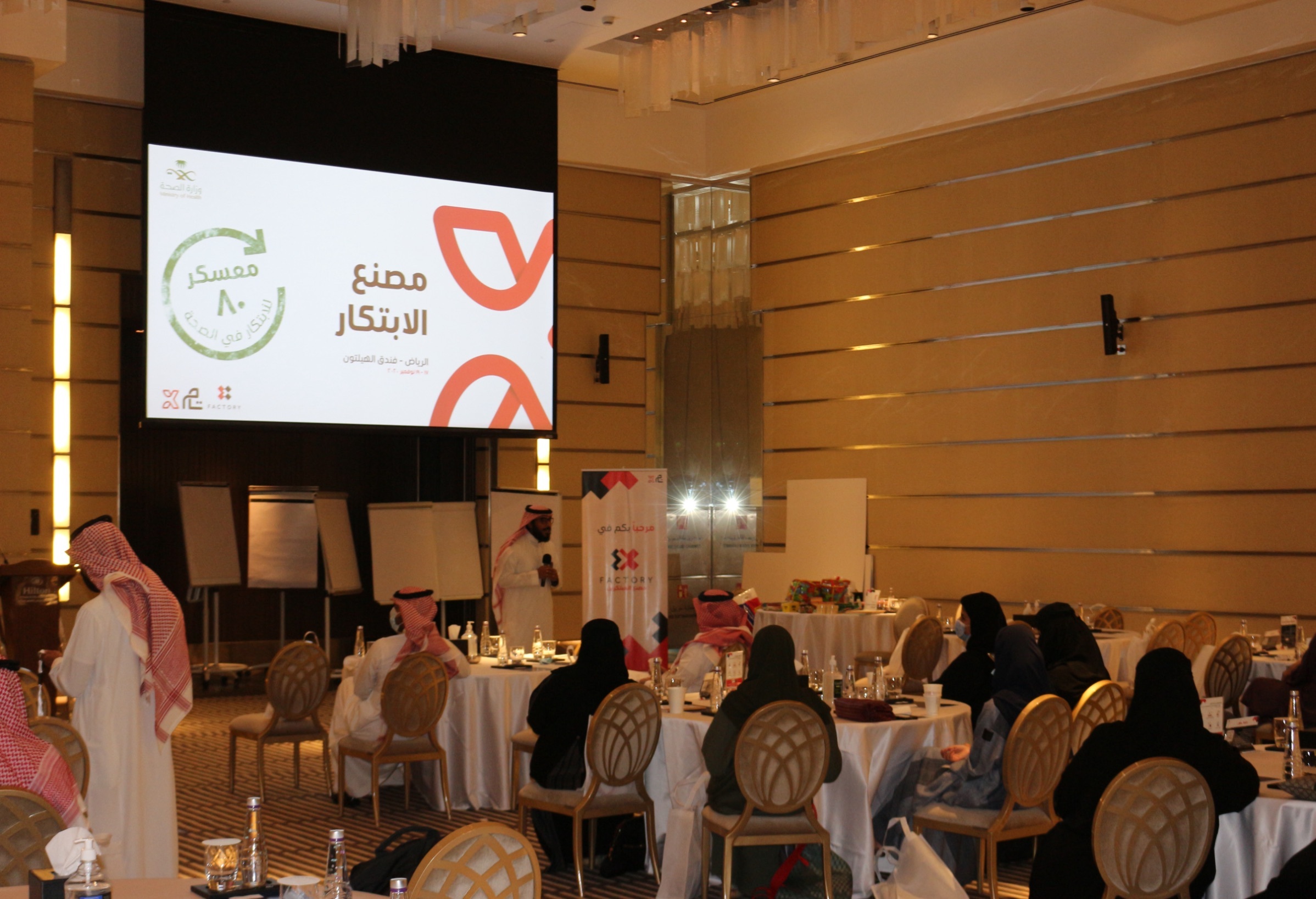 TAMx designed and implemented a three-day creation and innovation bootcamp as part of a forward-thinking initiative by the management of the Ministry of Health’s (MOH) marketing and awareness department for 35 of its staff members. The initiative was titled Bootcamp 80 on the basis of the kingdom’s Vision 2030 objective to raise the average age of citizens to 80 from its current 31.8 years.

The training program was invested in developing the innovation skills and capabilities of the department’s employees which, once completed, would raise the quality of their ideas, solutions, and campaigns, in turn increasing the quality of life within Saudi Arabia.

Before the program began, the participants were given an information-gathering form to fill out. They were then sent an email invitation to take part in the bootcamp along with the signup link and an RSVP for their attendance.

TAMx worked side by side with the bootcamp coaches in an effort to study and understand the training needs of the participants. In doing so, TAMx ensured the program’s content, objectives and activities conformed to the groups’ requirements based on the gathered information and directions from their respective department heads and managers.

The three-day bootcamp was divided into three segments (the training basics, content, and experience) split into four categories each. Bootcamp 80’s end targets can be summed up in four words: ‘development’ of creative problem-solving skills, ‘equipment’ of instantly-applicable tools and work models, ‘expansion’ of creative solutions and crisis aversion horizons, ‘enablement’ of effective, high-quality evaluations and implementations of innovative ideas.

To start with, the bootcamp focused on building an innovative and creative mindset among the groups with an overview of the program as a whole and its target outcomes. That focus then shifted to the actual generation of ideas using the best possible tools and methods. Finally, the attendees got to design and implement project processes with their related campaigns, which they would then build upon and present to their colleagues.

“Three happy days at the innovators factory. Different ideas, awesome business models, and an enthusiastic MOH team. Wait for us in unbelievable campaigns that convince and inspire you. Thank you TAMx Studio.” - Lamiaa AlGaith, Digital Product Manager at the Saudi Ministry of Health.

The unprecedented interactions and noticeable development of the participants’ skills during the different training segments can be witnessed through the multidimensional follow-up questionnaires and the recorded interviews conducted once the bootcamp was concluded. The majority of the attendees were pleased with the results and the overall organization of the bootcamp and were in fact excited to attend the many scheduled workshops and sessions provided.