To end the unavoidable exhaustion and tension of a rut brought on by the pandemic and the subsequent lockdown.
Challenge

The audience responded well to the challenges brought on by some of their favorite social media influencers. Not only did they alone take part in them but forwarded it along to friends and family, creating a digital social gathering of sorts.
Outcome

This project was able to actively engage more than 9,000 people, while indirectly capturing the attention and adding positivity to a few hundred thousand people’s lives in just 1 month.
Impact

Azla Challenges created a spirit of cooperation and positive competition among the participants, plus a bonus interaction between them and their favorite social media influencers.

As much as we try to avoid admitting its existence, there is no denying that the year 2020 did in fact happen. It was a difficult year for much of the world - except the lucky few living off the grid. Our only saving grace was the ability to communicate with our loved ones and find entertainment through the many social media platforms available.

Saudi Arabia declared the beginning of its 2020 lockdown in the first days of March. For most cities, this ended four months later in June - not an easy feat by any means. People took to social media to gain a sense of comfort in knowing that they were not alone. 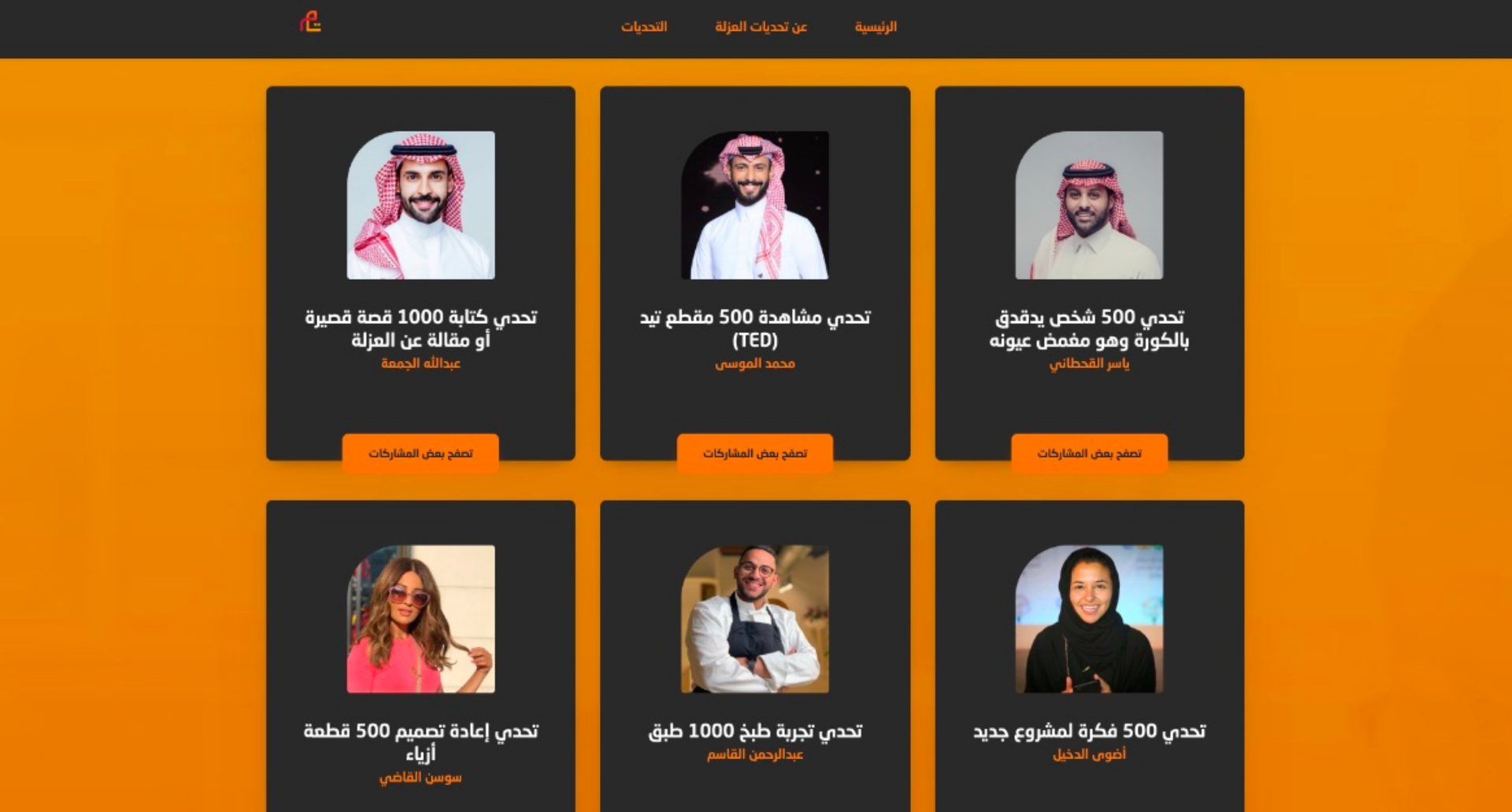 With such substantial social media consumption, the only thing left to do was to simply find ways for people to have fun. TAM partnered up with Saudi creative marketing agency Madeed in 2020 to work out ways to eliminate the lockdown-induced dullness through social media and its many influencers.

Under the Saudi national campaign motto “كلنا مسؤول” (Arabic for “We are all responsible”), the Azla (Isolation) Challenges was initiated to create a positive cooperative and competitive spirit. The construction of the multifaceted challenges fell upon the shoulders of social media influencers. The 16 influencers came up with 16 tasks for their followers to complete and forward to their friends; they ranged from educational to pure amusement.

The most popular challenges were those that pushed people to do something productive and educative, such as watching TED Talks, writing poems/short stories about isolation, and taking online courses on cooking and home cultivation. The other challenges, such as finding creative ways to entertain kids, becoming your own barista with coffee art, or even simply making a funny post, were all in the name of fun, laughter, and togetherness.

“On the 4th of April and the start of lockdown the #isolation_challenges were announced and I participated in the challenge of Dr. Mohammed Al-Hajji and I was not waiting for anything in return for participating, on the contrary he is the one who motivated me to complete the course I had registered for… And today I received an email that made my day. Thank you isolation challenges team and thank you Mohammed Al-Hajji.” - Maeen Banjar, Azla Challenges participant. (Translated Twitter post)

The 9,000+ participants were given the option to complete one or all of the challenges before the April 23rd deadline, and post it on their social media accounts under the hashtag #تحديات_العزلة. The submitted videos were then posted to the Azla Challenges website, garnering more than 600,000 views and over 470,000 visits.

This project was about engaging with the community to help it get through the tough times brought on by the pandemic. Social media entertainment kept the world from falling apart entirely. Projects such as Azla Challenges guided people to each other, eliminating the feeling of loneliness, seclusion, and distance.